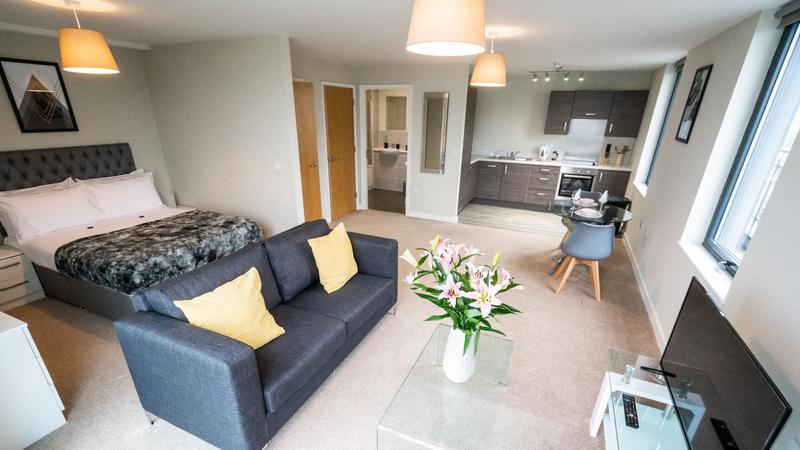 LIVING LIFE ON THE WATERFRONT

ADELPHI WHARF PHASE 3
The eagerly anticipated third phase of the award-winning Adelphi Wharf development has arrived. Located in a buy-to-let property hotspot, the ever-popular city of Salford, Adelphi Wharf Phase 3 follows on from the tremendous success of the first two phases, both of which are sold out and in construction. Investors were understandably enamoured with the development’s attractive modern apartments, superb waterfront location and the area’s ever-growing rental demand. Furthermore, the fact that Adelphi Wharf is being built by experienced UK developer Fortis Developments in association with Elite City Living has only enhanced investor demand for such a unique development.

Adelphi Wharf will be a beautiful tenant retreat, providing peaceful landscaped gardens alongside modern, urban living. Residents will overlook the River Irwell as well as living within easy reach of Manchester’s city centre. The third and final phase of this outstanding development will consist of 224 stunning apartments, ranging from spacious studios to luxury three-bedroom apartments. Each apartment
will be furnished to the highest standard*. In addition, residents of Adelphi Wharf will have access to a state-of-the-art private on-site gymnasium in Phase 1 of the development, as well as communal areas and secure bike storage for all residents and allocated parking spaces for selected units.

ALL YOU NEED - RIGHT ON YOUR DOORSTEP
Adelphi Wharf’s location is second-to-none. As well as overlooking the River Irwell, residents of this development are just a short walk from both Manchester and Salford city centres. This means that amenities like bars, restaurants, shops and attractions are just a stone’s throw away. Furthermore, essential public transport links are conveniently located, meaning that travelling in and around Greater Manchester has never been easier. Links by car, train, tram and bus are within reach and for those looking to travel further afield, Manchester Airport is less than 10 miles away.

SPECIFICATION
Each apartment at Adelphi Wharf is spacious and luxurious. Juliette balconies and private terraces enhance residents’ enjoyment of living by the riverside, whilst the high-end fixtures and furnishings offer the best of modern city living. The development itself has outstanding views of Salford and over the River Irwell to the West, towards the Meadows which provide an extensive green space in the heart of the city. At the forefront of new-build rental accommodation in the North West, the third and final phase of the Adelphi Wharf development will emulate the success of the previous two phases, with investors still clamouring after such sought-after investment opportunities. In addition to the development’s living spaces, the site will also provide extensive amenities for the residents. Each apartment will take advantage of the natural light afforded by the location. Bright communal areas, terrace gardens and a management office have been thoughtfully designed with residents in mind. Adelphi Wharf is the perfect resident retreat.

As well as a range of apartments, residents of Adelphi Wharf Phase 3 will have access to luxury on-site amenities, including a private fully-equipped gymnasium in Phase 1 of the development, stunning outdoor spaces and allocated residents parking on selected units.
Adelphi Wharf

ABOUT SALFORD
Chapel Street links the cities of Salford and Manchester and has been transformed from a traffic-choked highway into a distinctive city high street, which has won awards for its pedestrian-friendly design and for its safe environment for people, businesses and visitors alike. Alongside the improvements to the local infrastructure, the street encompasses stylish townhouses, 125,000 sqft of office space and a large hotel. Greater Manchester Salford Manchester The Adelphi Wharf development is located in the heart of Salford, Greater Manchester. Set against the backdrop of the River Irwell, the development is only a short walk from both Salford and Manchester city centres. Once known only as Manchester’s smaller neighbour, Salford has come into its own following comprehensive regeneration projects which have rejuvenated the entire city, allowing it to compete not only with Manchester but on a global scale.

WHAT’S ON THE HORIZON FOR SALFORD IN THE FUTURE?
As well as the continuing development of MediaCityUK, the regeneration of the Quays and the multi-million- pound Salford Central scheme, there is plenty of inward investment on the horizon for the city of Salford, including:

1.) The extension of MediaCityUK by 164 acres stretched across several phases over the next decade. Phase 2 has already begun and is set to be a more residential, community-based counterweight to the business-focused first wave.

2.)The completion of the enormous Port Salford scheme, making Salford a major shipping destination. The population of newly-regenerated Chapel Street with many bars, restaurants and shops over the coming years.

3.)The extension of the Metrolink tram system, encompassing Salford’s Trafford Park and running all the way to the Trafford Centre, the second-largest shopping complex in the UK

•Situated on the River Irwell

•All apartments are spacious and luxurious

•High-end fixtures and furnishings throughout

•Outstanding views of Salford and over the River Irwell